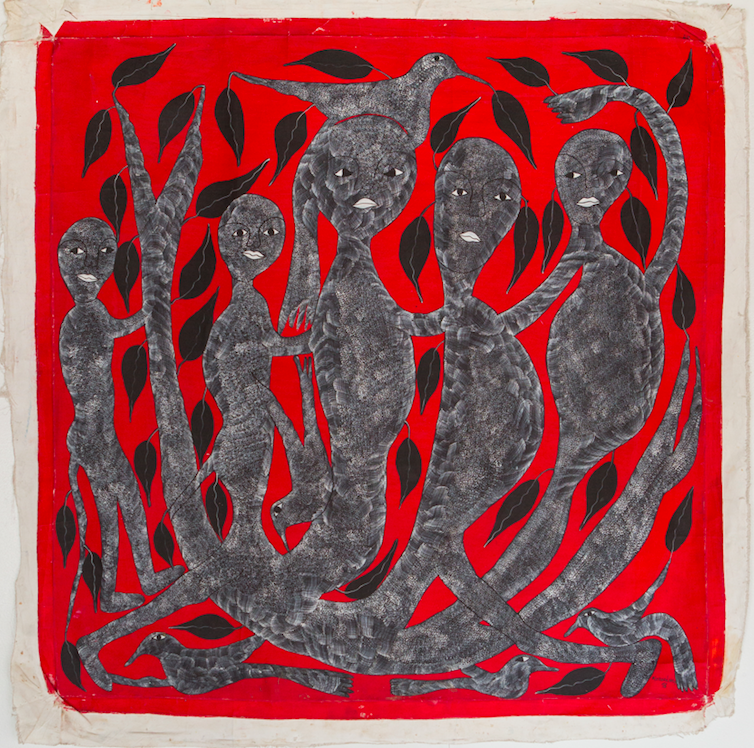 “Eyes on Sen Soley,” featuring work by Mackenley Darius, Anthony Martial, Richard Nesly, and Erivaux Prospere, is on view by appointment at The Bridge through September 30. Supplied photo.

When Haitian American art collector and curator Jeanremi Verella first encountered the Sen Soley art collective during a residency in Port-Au-Prince, he knew he had to bring the artists to America. But he quickly learned that strict visa quotas made this nearly impossible. So he brought their artwork instead.

Sen Soley is a Haitian art collective that includes artists Mackenley Darius, Anthony Martial, Richard Nesly, and Erivaux Prospere. It takes its name from the patois spelling of Saint Soleil, a Haitian art movement founded in 1973, and revives the stylized human and animal forms and Haitian Vodou symbolism that was the focus of the earlier group. Haitian Vodou is a religion that fuses the West African Vodun religion with Roman Catholicism. For Saint Soleil and Sen Soley alike, visual art represents a synthesis of mind, body, and nature. These artists look to their rural roots and the Haitian traditions of storytelling, music, writing, and religion, as well as dreams and visions for their inspiration.

Verella, who attended UVA, spent time learning about the artists in Haiti, and has now helped organize an exhibition at The Bridge Progressive Arts Initiative. “Eyes on Sen Soley” is open until September 30.

Haiti is in the midst of a tumultuous period. “There’ve been natural disasters, and political tension, again and again,” says Verella. Earlier this year, the country’s president was assassinated, and this week an earthquake killed more than 1,200 people.

“With everything that’s happening in Haiti right now, it feels really valuable to offer something beyond the headlines,” says Alan Goffinski, executive director of the BPAI.

Verella still hopes to find a city or organization willing to sponsor the artists. This would enable them to get their visas, interact with other artists, and expose their work to a wider audience. “It’s been such a humbling journey of living with the artwork and getting to unfold it at a different location and look at it with people,” says Verella.

The work is characterized by bold color and design with a surface that is kept flat with no illusion of depth. This jibes with the paintings’ role as symbolic entities depicting spiritual matters, rather than realistic vignettes of the physical world.

The exception to this is the work by Mackenley Darius, which has three-dimensional volume. “His style kind of branches out of the Sen Soley movement,” says Verella. “He does ethnography of Haiti and I think this gives him additional perspective, enabling him to blend the ideas of Sen Soley into his artwork.”

The stunning portrait of Haitian American art superstar Jean-Michel Basquiat (“Honor to My King”), who gazes soulfully from the canvas, is his. Basquiat incorporated Vodou images in his work. Here, Darius not only captures Basquiat, but he does so while emulating his subject’s distinctive style.

Richard Nesly’s paintings have the all-over rhythm of a frieze or piece of fabric. He reduces the palette to one or two colors to showcase the pattern that undulates across the work. Human, animal, and plant forms ooze out to form other entities, or flow into one another to suggest the interconnectedness of all things. In some pieces, these take on the appearance of a serpent, an important Vodou symbol.

Smack dab in the middle of Nesly’s “Nids Dé Zwazo,” you can see a Vodou symbol called a vèvè. An important part of Vodou ceremonies, vèvès are “drawn” on the ground using corn meal, flour, or some other powdery material. The vèvès are ritualistically destroyed during the ceremony when congregants dance across them, scattering the powder. Vèvès also appear in other works in the show.

Looking around the room, and perhaps with the exhibition’s title in mind, one is struck by the number of eyes that stare back at you. Prospere’s “Untitled 1” and “Untitled 2” feature densely packed ribbons of richly hued paint, that at first appear to be completely abstract, before you notice the eyes and mouths emerging from the ornate bands of color, and the suggestion of a figure. Are these intended as representations of otherworldly presences observing us from another dimension?

The eyes are also remarkable in Nesly’s “Lé Ancien,” adding a punch of energy to this striking work. Nesly creates enormous visual excitement through the interplay of pattern, figures, and color. Though Nesly’s work is highly stylized, the figures are individualized with characteristics and features that give us the impression of real people.

Anthony Martial’s work seems the most serious, perhaps because it is rendered in black and white. His figures of humans and birds are simple, but his works have a complexity and power, thanks to his compositional arrangements and sophisticated surface patterns.

When dealing with Haiti, it’s natural to focus on the suffering endured by the Haitian people, whether at the hands of Mother Nature or corrupt politicians. But “Eyes on Sen Soley” shows another side of Haiti, and in Goffinski’s words, “presents some humanizing culture so we can appreciate the Haitian people as people, and these artists as individuals.”

The paintings in the exhibition are all for sale as are prints of them. All proceeds directly support the artists.